I don't know much about the period. Except for the obvious things including the painful five-to-seven days, the unannounced arrival of this un-welcomed guest who is annoying; but would not go even if you beg. I also know what my science textbook and my female friends mentioned.

Females bleed for five fucking days, and still manage to work. And that is terrifying. I consider them to be very strong. And to maintain the balance between these tolerant and strong godess-like beings—and—meek and miserable people (I am talking about that boy in my mirror who stares back); I exist. When I have a paper cut, I whine for at least 30 minutes. I am so glad I never have to menstruate—imagine bleeding for five days; if you haven't already died due to pain. I hate paper cuts and they are fucking painful. (I better not get one, now that I have mentioned it.)

I can't do much about paper cuts, or period. But at least can help a female by carrying her bag, or buying them food they like (pizza and tacos are a safe bet), or at the very least—not to annoy them—I don't want to be killed!

But I am willing to bet I don't know much about periods. Especially the darned phrases. I just can't seem to understand them!

"Lost my period." I was about to leave for college yesterday when my friend said that. "Lost my period." Okay. "So?" I thought what is the big deal? "It has been two weeks", I responded. Come on! I know the period happens once in a month, hence the name "monthly" (except for the irregular cycles of this non-deterministic calamity), and it had been just two weeks since she had her periods. And I was thinking: isn't this a good thing? No pain! Turns out I got it wrong. "Lost my period means I [...] got it", she replied. "I'm bleeding".

You lost something—and at the same time, you got it? 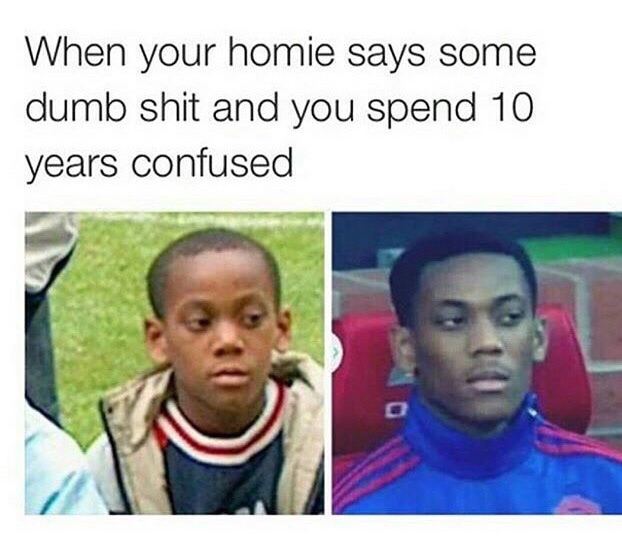 What kind of sorcery is that? How was I to know it meant the opposite of what it read? Lost the period? Why would you call it "losing"? That is beyond what my brain can comprehend. Why not say, "I got my periods"? When a pregnant lady gives birth to the child; she does not say "I lost my baby".
In all fairness, she does not say, "I got my baby" either. But she definitely did not lose the kid.
I used this analogy to convince myself that usage was wrong. I responded saying: "Then you definitely did not lose it." 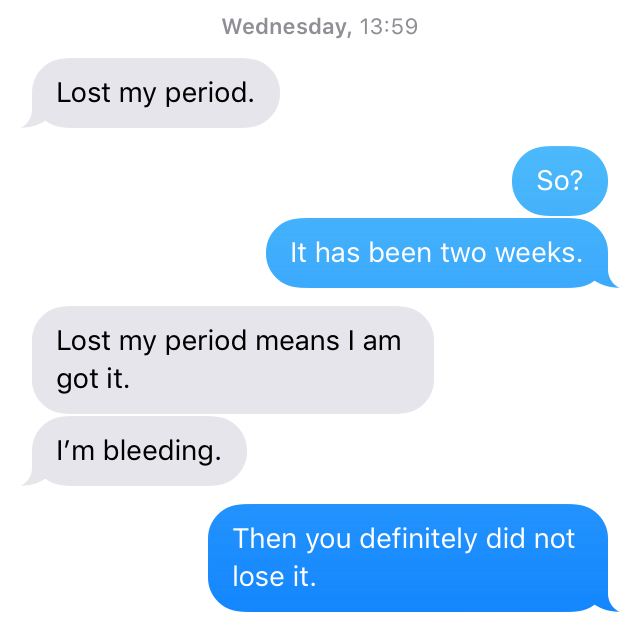 Think about it, the menstrual blood is right there in the sanitary napkin. A few drops here and there, but "lost"? I am lost for words—the one who authored this phrase must either be an idiot, or someone who did not understand the logic.

Let me tell you about other things people lose:

Tell me if people "get" any of those while losing at the same time.

Now, this confrontation [with the weird phrase] made me think "I missed my period" does not make sense either. For you to miss the event, the event should occur and you should have not attended it. When I say "I missed the train", it means the train left and I could not board the train. If the train was cancelled, there would have been no train to miss in the first place.

"I missed the doomsday!" No, I did not. It did not occur, for me to miss it.
When I missed the train; if the train could speak, it would not say "I missed a passenger". It would say, "A passenger did not show up."

So, you did not "miss the period". The brutal bloodshed did not show up. Hooray! Go get ice cream. And a pregnancy test kit.

Do people think before they author these phrases?

Languages are tools we use to express ourselves in a better and clearer way. Some of the English phrases are weird. As my classmate, Devang, once tweeted: "Why are priceless and worthless antonyms rather than synonyms?"

But none of these three is as bad as this phrase in Hindi: "मैं तुम्हारे बच्चे के माँ बनने वाली हूँ!" It is not related to the menstrual cycle, but hear me out. It translates to "I will be becoming the mother of your kid!" Hindi TV soaps and movies feature this sentence when a female tells the male she is pregnant. She could simply say "मैं गर्भवती हूँ", but no; they got to say some confusing shit. You may argue the former translation is not accurate and it should be "I am going to be your child's mother".

"So what?" I ask. So fucking what? That sentence is still incorrect. To begin with, in that scenario, pregnancy is in the present continuous tense. You are the host of the future child. The female is not undergoing metamorphosis like a caterpillar who is transforming into a butterfly, which it is implied in the original sentence. Though the pregnant lady's body structure in the uterus is drastically changing. And even if she was undergoing metamorphosis, the child is not born yet to truthify this claim. The female is incubating the baby, or fœtus depending on the stage of pregnancy. You are not about to, on becoming a mother of someone else's child. You are pregnant with a baby. The zygote is turning to embryo, then fœtus, which will turn into a baby.
Please do not utter random set of words that are logically inconsistent or ambiguous.

If a person is hearing "I lost my period", they would not go check if there are enough sanitary pads. As someone who has lost their appetite would not check if there is food in the fridge, and they might go see a doctor.

Speak clearly. And not gibbrish. What you say should make sense.

Suggestion for everyone: go speak to someone who knows about menstruation. It is important to learn about reproductive health even if you can't menstruate.

It’s hard not to tear up. It’s harder to find words and stand up. I see what I love turning into something I fear. I want back what was once dear. I want to be there for people who have suffered harm. Not my home to be the animal farm.

I really liked the style of storytelling. The letter Mata Hari wrote is about her life, set in the late nineteenth century to the second decade of the twentieth.